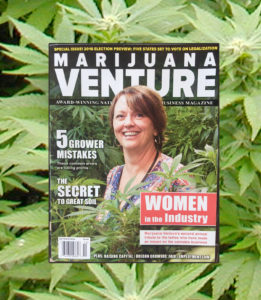 TUCSON, Ariz. — Searching for better opportunities, Rouben Beglarian came to the U.S. from Armenia in 1992 with very little money and English as his third language. Photo and cover by Suzy Tracy, Marketing Director

He built a successful granite fabrication business in Tucson, Arizona, before the legislation to permit medical marijuana businesses piqued his interest in 2010.

“It was a new industry,” Beglarian says. It was “exciting and getting a lot of press. I had been in the construction industry for 15 years and was looking for something new.”

Beglarian entered the Arizona lottery and was selected for a license to grow and dispense cannabis. On Dec. 1, 2012 he opened Southern Arizona Integrated Therapies, also known as SAINTS of Tucson, with his wife Kristina.

“We were the first store to open in Arizona,” Beglarian says.

Since opening, the dispensary has nearly tripled in size, from 638 square feet to just under 1,800. Beglarian built a 5,000-square-foot indoor cultivation facility to supply the dispensary. By producing its own cannabis and avoiding wholesalers as much as possible, SAINTS is able to keep prices competitively low, Beglarian says. SAINTS currently offers more than 40 strains and a wide selection of edibles, extracts and pre-rolls. Despite the size of the menu, the dispensary’s layout keeps the sales floor from feeling cluttered. The sales floor is located deep inside the dispensary — beyond a check-in counter, past a security guard, through the waiting room and behind a locked door. Inside, patients can peruse the uniform rows of product that are carefully positioned inside glass cases and along the back wall.

The dispensary has received both critical and commercial accolades. Patients, expecting a slow trickle of product from the state’s first dispensary, have lauded the selection of products, and press on both sides of the political spectrum praised Beglarian for his professional execution.

“It’s such a great success story,” Crownhart says. “He had the foresight to think about what would happen if medical marijuana passed in Arizona. They’re not Big Pharma. They’re not people who have family money or a trust-fund baby. He had to really think about it and save money and strive to make this happen.”