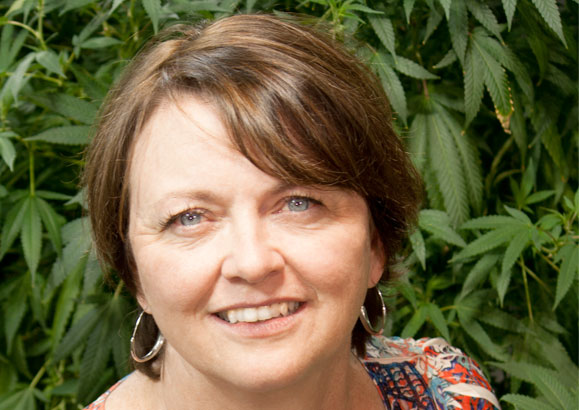 In 2010, when the debate over medical marijuana dominated the local news in Arizona, Susan Crownhart didn’t envision herself getting into the cannabis business.

At the time, she was working in granite sales. She and her husband were putting their oldest child through college and raising another two at home.

But when Proposition 203 passed and her boss, Rouben Beglarian, won a dispensary license, she began to think about a career change.

Beglarian asked Crownhart if she wanted to take over sales at the granite shop.

“No,” Crownhart responded. “I would rather work at the dispensary.”

Beglarian opened Southern Arizona Integrated Therapies on Dec. 1, 2012, making it the first licensed dispensary in the state and turning Crownhart into an overnight ambassador for the industry.

“I never would have fathomed this,” she says. “People that know me, they are surprised to find out that this is what I do.”

Even after helping run the business for the past four years, Crownhart can still hear her family hold their breath whenever somebody asks what she does for a living.

“I’m not embarrassed at all by what I do,” she says. “It’s just that everyone is so curious — even the most conservative of people are so curious. Sometimes I don’t tell them what I do just so it doesn’t monopolize the conversation.”

With expectations from the media, regulators, industry supporters and patients, Beglarian and Crownhart had to pave the way for future dispensaries and help guide the evolution of Arizona’s medical marijuana program without any sort of guide to follow.

“Because it was such a new industry, we couldn’t just open a book to find out how to operate a marijuana business,” Crownhart says. “People would come in and we’d be logging what works and what doesn’t work; I’d look for patterns with them. But like with anything, it comes down to managing and planning, which seems to be my whole life.”

Since its launch, SAINTS has doubled in both size and product offerings. Crownhart, who majored in business and marketing at the nearby University of Arizona, oversees the daily operations of the cultivation facility and dispensary and helps coordinate marketing and branding strategies.

“We wanted to definitely be professional, still medical, but a little on the edgier side,” Crownhart says. “I want someone to look at an ad, and without reading the print, know that is our ad.”

Recently, she began working to revamp the company’s online presence and start a new social media marketing push. In order to help manage the grow operation, she turns to Alison Gross to handle the day-to-day inventory management. Crownhart says that women are the driving force at SAINTS on both sides of the counter. The majority of the dispensary’s patients are female, she says.